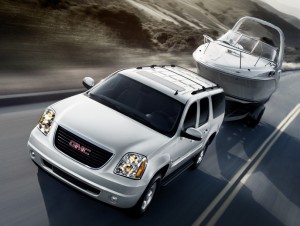 Jim Hudson GMC, the #1 GMC dealership in the state of South Carolina, is thrilled to highlight AutoPacific’s announcement that the GMC Yukon took top honors in the full-size SUV category of their 15th annual Vehicle Satisfaction Awards.

“Vehicles like the GMC Yukon that score highest in the Vehicle Satisfaction Awards are delivering value and satisfaction across a wide range of attributes,” said George Peterson, president of AutoPacific. “The winners perform well in 48 separate categories that objectively measure the ownership experience.” The awards are based on the firm’s survey of more than 68,000 vehicle owners.

Jim Hudson GMC is the #1 GMC dealer in South Carolina, and features a great selection of GMC Yukon and Yukon XL full-size SUVs at their dealership at 7201 Garners Ferry Road.  Jim Hudson has been serving the midlands of South Carolina for over 30 years, including the communities of Columbia, Sumter, Orangeburg, and Newberry, with a focus on complete customer satisfaction before, during, and after the sale.  Jim Hudson has been voted Best New Car Dealership in Columbia, South Carolina an unmatched ten years in a row and counting by readers of The State, which only serves to underscore Jim Hudson’s commitment to customer service.  Jim Hudson features GMC Certified Service technicians trained in all the elements of caring for GMC models both past and present, and carries a large selection of parts and accessories to allow truck and SUV owners in the Columbia area to personalize their vehicle to suit their tastes.  For more information, we encourage you to visit Jim Hudson’s GMC Yukon Columbia SC website, or call Jim Hudson GMC directly at (888) 377-4971.

Other used GMC SUVs for sale in Columbia SC

Yukon is one of 21 BOVY segment winners this year and represents IntelliChoice’s “best value” pick among full-size SUVs, based on its analysis of ownership costs, including depreciation, maintenance, repairs, fuel, fees, financing and insurance.

“This year’s IntelliChoice ‘Best Overall Value’ honor reconfirms what Consumer Guide said about the Yukon last year – that it’s a ‘best buy,’” said Brian Sweeney, general manager of Buick GMC. “Today’s consumers are looking for vehicles that will provide the best value for their money, which is what we strive to accomplish with GMC vehicles. This award proves that we are achieving our goal.”

The 2011 GMC Yukon for sale in Columbia offers premium SUV drivers available seating for up to nine with a host of features designed to provide both a touch of luxury and the rugged durability expected of the GMC name. Available heated and ventilated leather front seats provide ample comfort on Columbia’s roads, while the rear seats can be had with a three-passenger bench or two-passenger captain’s chairs that can be heated as well. Second-row occupants can also enjoy the available rear-seat entertainment system (and, on Yukon XL models, the three-passenger third row can receive its own screen). Equipped with the 5.3L Vortec V8 engine, Yukon can tow up to 8,500 pounds, while Yukon Denali’s 6.2L V8 provides effortless acceleration both around the city and on the highway.

Style abounds in the GMC Yukon, with a choice of standard 17-inch aluminum wheels all the way up to chrome 22-inch wheels available. (Yukon Denali models come standard with 20-inch chrome wheels.) Available power-retractable assist steps ease entry and exit from the well-appointed interior, with available touchscreen DVD-based navigation and tri-zone automatic climate control to keep you comfortable and on course. Columbia drives can stay connected with available Bluetooth hands-free connectivity for cell phones, an available USB port input for controlling an MP3 player through the audio system, and the safety of OnStar service for six months. OnStar provides you with turn-by-turn directions downloaded directly to your Yukon, stolen vehicle location services, and the convenience and safety of an OnStar Advisor that can both look up the nearest gas stations and notify the authorities should you be involved in an accident.

Jim Hudson GMC is the premier Columbia GMC dealership serving the midlands of South Carolina including Newberry, Orangeburg, Sumter, and Lugoff with a commitment to complete customer satisfaction before, during, and after the sale.  Jim Hudson carries a great selection of GMC Yukon SUVs for sale, from entry-level SLE models to fully-loaded Denali models to suit any taste.  Jim Hudson has been voted Best New Car Dealership an unmatched ten years in a row by readers of The State’s annual Readers’ Choice poll, and aims to maintain the same levels of exceptional customer service for many years to come.  For more information, visit the GMC Yukon Columbia SC page on their website or call (803) 783-0110. 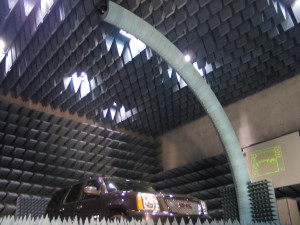 The GMC Yukon for sale in Columbia SC undergoes extensive testing to ensure its antennas receive exceptional reception in all conditions. (GM Media)

Jim Hudson GMC, the premier Columbia GMC dealer, is exceptionally proud of the 2011 GMC Yukon Denali, a top choice among full-size luxury SUV buyers in South Carolina.  Yukon Denali’s professional grade engineering extends down to the smallest detail, from the perforated leather seating to the navigation system’s ability to receive GPS signals in adverse conditions.  Whether driving through a mountain pass or a concrete canyon today’s on-the-go drivers shouldn’t have to worry about wireless signal strength, and they won’t when they are behind the wheel of the 2011 GMC Yukon Denali.

In an era where cars and trucks double as online data and information portals, GMC’s engineers have created a first-of-its-kind gigantic signal-testing facility to ensure that data, cellular and other signals remain active in areas where wireless signal strength is limited. The GMC Yukon Denali for sale in Columbia SC is one of the first vehicles to benefit from the technology, which looks like something out of a sci-fi movie.

The data is used to optimize satellite antenna design and placement on GMC’s portfolio of trucks and SUVs.

“There are only two other vehicle antenna validation systems like this anywhere in the world,” said Janalee Graham, who runs testing for GMC using the ATS arch. “And ours was the first.

“The ATS system lets us test the antenna systems on the GMC Yukon Denali in virtually every possible real-world condition,” said Graham. “What would take other automakers days of testing can be done in minutes with this system.”

Graham confesses to dragging her family to remote parts of the country to spot test XM satellite radio and OnStar signals on GMC trucks and SUVs, saying “they’ve been unwittingly pulled into my antenna obsession on several occasions while traveling.”  (A three-month trial of XM Satellite Radio and six months of OnStar with turn-by-turn navigation is standard equipment on all Yukon models.)